Another year, another Global Game Jam!  One of my favorite events of the year.  This time was different in that I came to this one with a team already prepared.  We had met a few weeks prior in preparation of the Cartoon Network Game Jam (much more about that later!), and we were looking at the GGJ as a practice run for how well our group would work together.

This year's theme was "ritual", which is an awesome word to build around since it can be interpreted many ways.  We opted to go with a more traditional interpretation, where the player would perform a series of small rituals/tasks.  From the set of diversifiers, we focused on not using any dialog or cutscenes within the game, and creating a non-violent game. 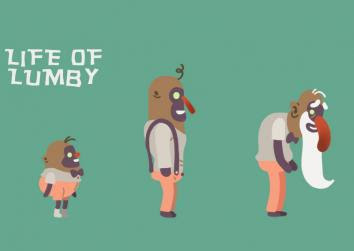 What resulted is Life of Lumby, where you guide the titular character through various stages of his life, performing a set of rituals to aid his community and gain favor with deities.

On the positive side, the game looks and sounds great.  It was an interesting challenge to have created a kind of game that's more of an "interactive experience"/story-based game than anything technically complicated.  As such, we didn't really have much experience telling a story through game, so our design was a bit disjointed and required us to take some time during lunch on Saturday to flesh out some of the specifics.  Additionally, while we managed to get all of our minimum design requirements in and (mostly) working by the end of the jam, our cohesive story and overall vision didn't quite make it through.  For example, one idea we focused on was to have Lumby ascend and reincarnate once he's completed his rituals (and his life)...that's only hinted at with the white-out at the end of the game.  We realized we could have done more to incorporate additional ideas - such as more NPCs - even if they would have been programmer art.

Overall, I'm pleased with how everything turned out.  I'm particularly glad how well our team has gelled over the last few weeks - be on the lookout for more great stuff from us soon!
Posted by Tim at 6:56 PM