All right, I think I've gotten over the initial hurdles of game navigation. I decided to redesign the inventory to stay on-screen at all times. The retractable inventory was getting a little unwieldy, plus I like the idea of seeing what objects you have available at a glance. The only problem is that the inventory "slides" along with the rest of the room when the player changes views, but it's more of an aesthetic issue that hopefully no one will notice. Well, unless they've read this. To help combat that issue, I've placed the inventory at the bottom of the screen. 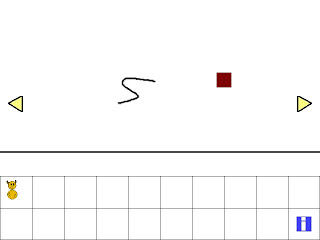 So here's how it works: the player clicks and drags items from the inventory onto the screen, and the item snaps back into place when the player releases the mouse button. Unless it happened to be over the hot spot (the red square, in this case), in which case it will set the item there and disable it from the inventory. And by disabled, I mean the item stays there, but is grayed out and can't be clicked or moved. As an early design decision, I figured, like some escape games, that I'd have a fixed inventory - usually when the inventory is full but all the items are used, you're at the end of the game. It's an easy fix to just wipe the item out of the inventory if I need more storage space, so to speak.

By the way, the "S" on the wall there indicated that it's the south wall. I've got an "E" and "W" wall as well, and the door (as seen in the previous post) is on the north wall. Hooray for programmer art! 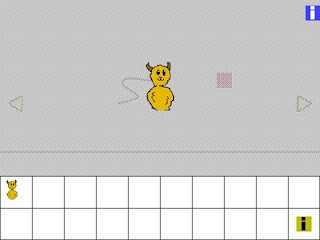 I've also implemented the close-up feature seen in many escape games. Typically you can zoom in on an object for closer inspection...this is most often for combining two objects for another purpose, or there's some clue to another puzzle hidden on the back or inside the object. Here, the player toggles the button on the lower right to engage "zoom" mode, then clicks an item in the inventory. A gray screen pops up with an enlarged picture of the item. The player cannot resume play until the close-up screen is closed with the button in the upper right.

One helpful side-effect of writing this all out in a blog is that I'm realizing potential pitfalls when it comes to my game design. For example, I just remembered that I effectively disabled clicking-and-dragging inventory items when the item is in close-up, to prevent said item interacting with what's going on behind the close-up "window". This will no doubt hinder any future puzzles if I plan to combine items. So, I wrote myself a note, and will see to fixing that later.

With the higher level components of the game mostly taken care of, now comes the hard part - puzzle design!
Posted by Tim at 5:07 PM 2 comments:

All right. Here it is. If I'm going to be talking this project up to people, I'd better follow through on my promise to myself and get some actual work done on this.

As I mentioned elsewhere on my website, some of my favorite games to play online are the "escape the room" games, which I usually find at Jay is Games. It was suggested to me that since I like them so much, I should make one. So, here is the beginning stages of that project.

For those unfamiliar with the genre, "escape the room" games are pretty much just that - you find yourself locked in some kind of enclosure, and you have to use the objects found inside the room to escape. This takes the form of logic puzzles, ranging from the simple (use key on locked desk drawer) to figuring out codes (combination locks) to sometimes bizarre leaps in logic (tie a sawblade to an eggbeater to fashion a drill). It seems that these games are popular in Japan; therefore, you'll occasionally have to sift through some Engrish. And sometimes it devolves into a tedious pixel hunt. Luckily, on the Jay is Games site, a walkthrough is usually posted within a few hours if you get stuck.

If you'd like to try these kinds of games out, one of my favorites is Vision. This one is a bit long, but anything else by the developer, neutral, is also very good.

I've decided to start out by developing this in Game Maker. Why? Because it's free, I know how to use it, and it's what I have. I would do it in Flash, if I could afford it to tinker around with it. These kinds of games are a little complicated for something in 3D, although maybe if I had the resources and art software, I could do that. But for now, Game Maker. 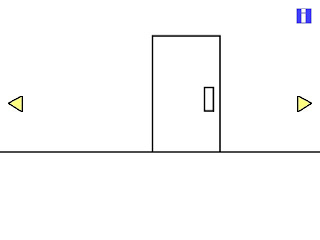 Right now, all I have is the room itself, and a crude navigation system. The nice thing about Game Maker is that it's set up as a series of rooms. My plan is that each view, or side of the room, or close up, can be represented with a separate room in Game Maker, and the inventory and such can be dealt with by "persistent" objects.

My main sticking point right up front is exactly how I'd like the game to operate. Oftentimes these games have an inventory on the side of the "room" picture. Since I'm experimenting here, I have currently implemented a retractable inventory (as indicated by the blue "I"). I'm deciding how I want the player to interact with the inventory, whether to select and highlight it in the inventory, or allow the user to drag the object around with the mouse. I need to sit down and either design out how I want this to work, or just fiddle with it some more until I get something I like.

So that's what I got so far. I'm going to attempt to get a fairly intuitive interface finished (at least by escape-the-room standards), and then I'm going to write up a story/design some puzzles.
Posted by Tim at 7:18 PM No comments:

I've fallen into a rut, and it's not the good kind of rut. Or else it'd be a routine. Anyway, I've fallen back into bad habits, and I haven't made much progress lately toward my goal of getting a job in the videogame industry. Part of that progress involves staying on top of videogame trends as well as my own personal development. Both of these things I plan to keep updates on my website and this blog, which I have been neglecting lately.

So, here's the plan.

Step 1: Work on my own games.
Since I'm not employed as of this writing, technically I could consider myself an independent game developer. And as such, I should be making games. I've had a couple ideas floating around in my head, and now is the time to put them into practice. And for accountability purposes, I'm going to blog about the process.

Step 2: Play more MMOs.
I attended the Boston Postmortem again last night, and talked with some people from Turbine, one of the major game companies in the Boston area. It seems like if you hold a game job at a company in Massachusetts, chances are that you worked for Turbine at some point. And I realized that I'm not as well versed in MMOs as I probably should be, considering a) if I want to work at Turbine, and b) given the plethora of free-to-play MMOs that are out there. Granted, most may not be of the best quality, but then, one could argue that for a majority of games. Anyway, my point is that I'm going to try some more of these MMOs, and write some of my experiences about them.

Step 2a: Write about casual games.
Another thing I had planned, related to the previous paragraph, was to write about some of my more favorite casual games that I had found online. I probably won't go into a detailed review, but I wanted to show off some of the games I thought were fun, and maybe provide a little insight into the kinds of games that I enjoy.

Hopefully this gives my blog here a little more focused purpose, and maybe you and I can both learn something from all of this. There's a strong chance I'll even make Twitter updates when I update here, for added pressure on myself. Wish me luck!
Posted by Tim at 4:14 PM No comments: